Ashi Jazzin was born and raised in Johto near Ecruteak City on a little farming ranch run by her parents. The farm raised mareep, flaaffy, miltank, tauros, and growlithe. Her father looked after most of the livestock, and fostered some of the best growlithe that would go on to help with the police force around Ecruteak and Goldenrod City. Her mother primarily took care of the bird pokemon on the farm and raised hoothoot, pidgey, and murkrow, but on occasion would help her husband with the growlithe training sessions.

Instead of leaving to start her Pokémon journey with the other children to visit New Bark Town at the age of 10, AJ decided to stay at home with her parents and help look after the ranch. She was rewarded with a special surprise and her parents gave her a Pokémon egg bred from their star ampharos. The mareep hatched a few weeks later, and soon the two became inseparable. So much so, that the mareep would sleep in AJ's room at night! Her parents didn't mind, they were just glad to have their daughter home.

AJ stayed home, helping on the ranch for years. Thinking about future days, her parents finally approached her about taking over the farm when they retired. AJ wanted nothing more than to make her parents proud, but was scared that maybe she didn't have what it took to take the reins. Her parents understood, and AJ's mother suggested that she finally take that journey she had skipped years before. Her father was reluctant to agree, but did so with the condition that AJ take a trained growlithe on the journey.

It was decided, and just after her 16th birthday AJ got her things together, bid her parents good bye and left on a journey of self discovery. With her were three Pokémon to help on the adventure: her mareep Arista, growlithe Hero, and tauros Rosco.

Through her travels roaming the Johto region, Arista grew steadily, evolving first into flaaffy and soon after a fully-charged ampharos. Hero remained obedient, but AJ was never able to find a fire stone to help him evolve. Rosco was more than a handful early on and hated to back down in a battle, but with time he learned to listen to his trainer.

AJ steadily made progress, and it didn't take long for the Pokémon Party to grow. The first Pokémon she captured was a rambunctious whooper named Romeo, now a quagsire. The next was a shy cubone named Colby, who followed after AJ helped get the little Pokémon's bone club back. And lastly, the Pokétrainer happened upon a shiny trapinch whom she named Jaden! At first she didn't know what a rare treasure she had captured, but she was soon made aware.

The journey through Johto took her through many difficult challenges, but each accomplishment only made the girls' confidence grow. Once AJ had managed to gather 7 out of 8 gym badges, she was certain the last one would be a breeze. It was to her surprise when she traveled to meet the last Pokémon gym leader, Clair of the Blackthorn Gym, and AJ and her team were completely crushed without an ounce of sympathy.

AJ has been hesitant to send her Pokémon into fierce battle following their defeat at the Blackthorn Gym. She blames herself for putting her Pokémon into harm's way and has been wandering aimlessly for the last year and a half. She knows that one day she will have to challenge Clair again, but hasn't found the courage within to train harder. Shamed, AJ has refused to contact her parents back on the farm.

AJ finds herself more comfortable in the company of Pokémon than people. Her parents taught her that honesty was the best policy, but the girl has trouble tempering honesty with tact – and has gotten herself in trouble for being too blunt. AJ can be both stubborn and hot-headed, and when she gets riled she tends not to think things through. Now traveling after her defeat, AJ appears to most people as aloof and distant.

AJ tends to refer to her Pokémon more so as her friends than being her Pokémon, her parents often told her she spoils them. After a days worth of travel AJ normally lets her Pokémon out to play and stretch. AJ normally takes breaks during the day for a nap, she believes a well fed and rested person is a happy person. She enjoys snacks and practicing her hand at making treats for her and her Pokémon. She tends to day dream often while with other people or especially by herself. She has gotten lost many times while traveling due to this distraction.

AJ stands at a pretty average 5'5”, with a slender build thanks to her constant traveling. Her skin is tanned from mostly being outdoors. Ashi's hair is a bright strawberry blond, and reaches to her shoulders. Her bangs often hang in front of her blue-gray eyes, which shine like polished marble. The rest of her locks are usually pulled back into a pony tail and covered with a bandanna.

She likes to keep her clothing simple, and in warmer weather wears blue jean shorts, a tank top and a pair of sneakers. For chillier times she ears a jacket and matching bandanna, both with Pokémon logos. She wears a pair of grip gloves to protect her hands. Hanging around her neck is a custom lilac Pokéball, accented with a bright yellow star – a gift from her mother, which she the trainer uses to keep her ampharos Arista close! She also has a large backpack for her travels, but will often use Rosco as a riding mount or just to carry the bag.

Please contact me if you're interested in using AJ in any stories, RP, or art work. Thank you! 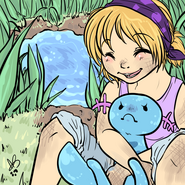 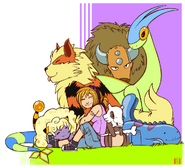 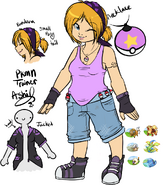