Most of the time, Zack loves to be with other people. However, when he is alone without friends or Pokémon, he goes into a state wherein he does not know what to do. But when he is with people, he talks a lot and tries his best to involve himself in the conversation. He loves to talk about animé, manga, video games, etc. Sometimes talking about a different subject may be difficult. He dreams of one day being famous and having many friends. He always at least keeps one of his Pokémon out of its Pokéball. He is very friendly and tries his best to make many friends. He loves to play video games and has a habit of losing track of time. He loves all his Pokémon very much.

He has long brown hair and brown eyes. He is about 5'1". He wears a Growlithe pattern shirt, a Junpei Baseball Cap (from one of his favorite games of all time), blue jeans, and running shoes.

His home town was Akitla Town. As a child, he was very spoiled and always got attention. Once his family became middle class and he needed to entertain himself, he surrounded himself with games and other things. But once he got his first Pokémon, his joy sprouted to the farthest reaches of his heart. About one month ago, he went on a journey with friends. He needed to finish this journey early because he got a free ticket to Unova. He couldn't let this opportunity pass him up. While in Unova, he battled and won against four Gym Leaders. He came back to his home region of Tatsu for UNKNOWN REASONS.

Zack's parents noticed he was lonely person all the time. So, on his 10th Birthday, his parents gave him his first Pokémon, a Growlithe. Growlithe were pretty rare where Zack lived, so having a Fire-type was a true honor. And thus their journey began!

Zack found Shina near a lake, injured and unconscious. Zack nursed the wounded Totodile back to health. She was very energetic and would always follow Zack. So, one day, Zack finally recruited her onto his team. She seems to have a fear of Ground-types, most likely because she might have originally been injured by one. During her battle with Elesa's Emolga, she learned Ice Fang and evolved into Croconaw.

Sakura was found by Zack in his home town of Akitla Town when he came back from Unova. She made an igloo outside of Zack's house, refusing to move. The Snorunt was taking territory, so Zack needed to show his dominance. He did this by withstanding her attacks. She found him worth, and thus joined him on his adventure.

Traditionally, when a member of Zack's family reaches at the age of 16, an egg from the family's farm is to be given to the heir. This egg however, was a mystery and appeared at the farm from an unknown Pokémon.

While in the region of Unova, Zack was given an egg which eventually hatched into a Togepi. The Togepi, named Jin, was very friendly, even to rude or "evil" pokemon! Most of the time, Zack would never use Jin in battle. But one day, Jin evolved into a Togetic and became very powerful.

Tentao was the leader of the Tangela Tribe because he was the only one in the Tribe who learned Solar Beam. Zack saw potential in this Tangela. Zack was ambushed by Tentao and his Tangela Tribe. However, a group of hunters attacked the Tangela Tribe. Tentao let Zack free so he would escape from the hunters. Zack refused and fought the hunters. By winning, Tentao wanted to join Zack so he could become strong enough to protect his Tribe.

This character was made by Growlithe of /TR/. Please ask for permission before using this character. Please make sure if you use this character link or work to this page. I hope you like him!

In the near future

You better believe it.

An attempt to draw himself 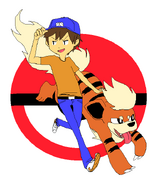 Something witty goes here I guess
Add a photo to this gallery
Retrieved from "https://trleague.fandom.com/wiki/Zack_(AKA_Growlithe)?oldid=5894"
Community content is available under CC-BY-SA unless otherwise noted.